Snowboarding in the SkiWelt 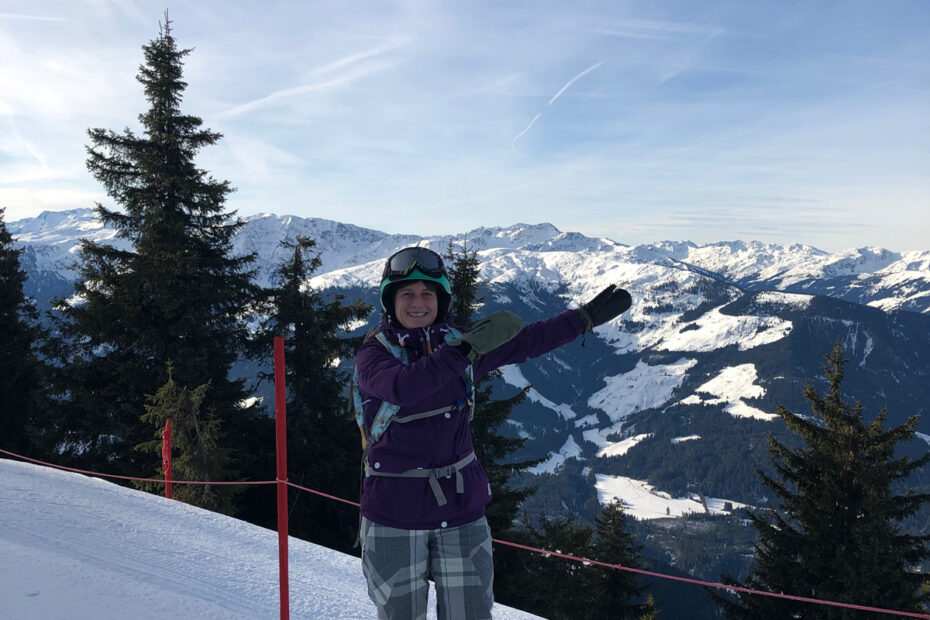 The girls trip is now an official annual fixture! In 2018 we headed to Western Italy and explored some of the local ski fields of the Piedmont region. In 2019 we spent a long weekend in St-Jean de Sixt, France. For 2020 we had the opportunity to try Austria and it’s largest connected ski area, the SkiWelt.

We were staying in the pretty village of Kelchsau a short drive up the valley from the lifts in Hopfgarten. We had self-catering accommodation organised through a friend of a friend – so it was excellent value! The village has all the basic amenities, a Spar (check the opening times at the weekend). A pub which did nice traditional food and a cash machine. There is a ski bus that connects Kelchsau to Hopfgarten but we had a hire car so didn’t need to use it.

We arrived at about 6pm on the Friday evening after flying from Heathrow to Munich. After finding our accommodation we headed straight for the pub and had dinner (a traditional schnitzel) and a few pints whilst studying the piste map and working out a plan for the next day. I love coming to a new area but it is a bit daunting trying to decipher the piste map and find the best areas.

There was only four of us in the party this year and this number was reduced to three on the first morning when poor Alex woke up and found she couldn’t move her neck. Not good for snowboarding! So we headed down the valley and parked at the lifts at Hopfgarten. Parking was free and we had no issues finding a space. From the bottom it is two gondolas (Salvenbahn 1 and 2) to the top of the mountain.

Despite much of the valley looking very green, there was plenty of snow on the pistes. Pretty much the whole of the area was open. However much of the snow was man-made and we all found the first morning hard going as we all tried to remember how to snowboard! We headed first towards Söll and we enjoyed the long blue piste 40 that ran down to the village before heading back towards Hopfgarten, stopping at a few mountain huts on the way. It was a pretty early finish on the first day as we had a plan for the evening – tobogganing!

We drove round the valley to Söll (about a 20 minute journey) for the night tobogganing. It was clearly the place to be on a Saturday night in the SkiWelt! Tobogganing is not included on the ski pass, it’s €30 for the pass and the sledge rental. But there are two runs to choose, the Hexenritt and the Mondrodelbahn, both approx 4km long and they are both floodlit until 10:30pm.

We chose the Mondrodelbahn run first, which doubles up as the piste number 40 that we’d done earlier in the day. And I actually thought I was going to die! I definitely do not have a future career as an Olympic luger! I won the prize for the longest time taken to get down the mountain on a sledge. People were flying down the run but my self preservation gene and well and truly kicked in and I just wanted to get down alive! For the second run we went down the Hexenritt. This track is only used as a toboggan run and this was a much more enjoyable affair and was actually a good laugh. Two runs was enough for me and we finished off the evening with après at the Moonlight Bar.

For the second day we decided to do the SkiWelt tour. Being all intermediate snowboarders it looked like a good mission for the day and a nice way to see the whole area. We attempted the clockwise tour, so headed towards Itter, then Söll and stopped for lunch at the top of Scheffau. Some of the valley runs were really nice (and very long!) but quite a few of the pistes transverse the mountain and are a funny camber. Plus the slopes were mostly North facing so there was a couple of icy patches.

We realised that we weren’t going to make it the whole way round at lunchtime so decided to leave the Westendorf area for another day but that was just the beginning of our problems! After one more valley run down to Ellmau we tried to head for home and that is where we came unstuck! We spent an hour trying to find the piste we needed to get us home. It was like ground-hog day, we kept ending up back at the same (wrong) lift. By 3:30pm we realised we weren’t going to make it. So sheepishly we headed back to Ellmau and tried to get back to Hopfgarten. First by ski bus but this wasn’t going to happen so ended up in a taxi and €55 poorer!

We still can’t work out where we went wrong but we will be back to try again. Next time remembering to use the SkiWelt navigational App that I had on my phone (doh!!). Later found out that the SkiWelt tour is 90km!

As we failed to see some of the areas the day before on the ill-fated SkiWelt tour we decided to head towards the Westendorf area, about a 20 minute drive from Kelchsau. We parked in Brixen im Thale (again parking was free and plentiful) and headed up the SkiWeltbahn gondola. We really liked the Westendorf area, particularly the blue piste 111 and the red piste 120 down towards the Kitzbuhel link. The pistes had good variation and less camber, and we really got into our flow (finally on day three!). We also found a Skiroute which was a little gem. Not much more then a track but there was no-one on it and so scenic! It popped us out at mountain restaurant no-where near a lift, but thankfully a regular ski-bus service rescued us and we stumbled-upon a lovely place to have lunch!

The final evening was out in the village of Hopfgarten. There are a couple of nice places to eat and offers a good combination of traditional and modern cuisine. Again it was a really good value with a meal for four, including wine, coming to €65!

As we had an early evening flight back to Heathrow we had time for a couple of hours on the slopes on the final morning before we had to say good-bye to the mountains. We headed back up the main gondola in Hopfgarten and skied towards Brixen im Thale. These slopes faced South so they had already softened up a little and they were a really nice mixture of long blues and reds. Wished we’d discovered them on our first day – but we will know for next time.

After a decade of skiing it was great to finally get to Austria. Eating on and off the mountain was exceptionally good value and all the food was delicious. The ski area is really varied with the long valley runs, the SkiWelt Tour and the different villages. The pistes could have definitely been way-marked better. More snow would have been nice, but it is a great location for a long weekend (or longer)!