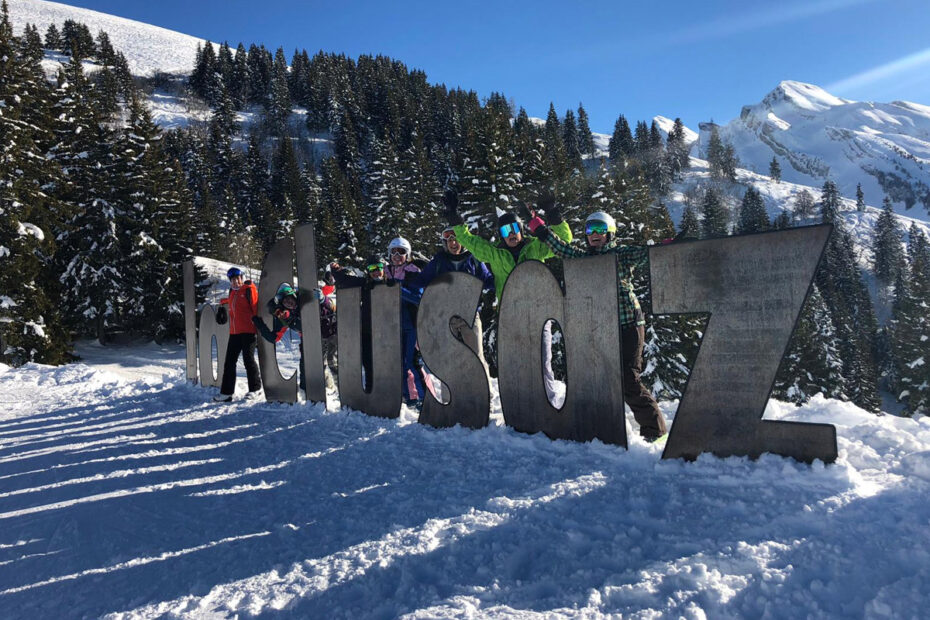 After last years girlie ski weekend we were all keen to make it an annual fixture on the calendar. This year we decided to head to St-Jean de Sixt and the ski areas of La Clusaz and Le Grand Bornand. So after almost a year in the planning, a last-minute accommodation cancellation and 10cm of snow falling in the UK the day before we were due to depart. It was finally time to pack the snowboards and escape to the alps for a weekend of snowboarding in La Clusaz.

We chose to stay in a self-catering chalet in the small village of St-Jean de Sixt. It is conveniently located half-way between the ski areas of La Clusaz and Le Grand Bornand. It was a fairly smooth journey considering the heavy snowfall in the UK. Unfortunately we arrived with the hoards on a Saturday afternoon at Geneva airport!

We waited for over an hour for the snowboards to appear, but thankfully they did. Our transfer driver was waiting for us in arrivals. It was a private transfer so no waiting around and at £48 each for a return trip an absolute steal.  Much better than having to deal with the car rental chaos! It was just an hour up the road to St-Jean de Sixt. We arrived in the village by 8pm, just in time to grab some pizza’s from the takeaway (the Brie and ham topping was very tasty!).

We had made our original booking back in April last year through homeandaway.co.uk but because of an unfortunate miscommunication a couple of weeks before we were due to fly out we discovered the chalet had been double-booked! Thankfully the original hosts were very helpful in finding us an alternative place to stay. Chalet Le Renardeau, which was in St-Jean de Sixt.

There was eight of us staying in the chalet and the space was comfortable. There was one bedroom downstairs, a WC, bathroom, a well equipped kitchen, dining table to seat eight and a lounge area with a lovely log burning stove. Upstairs there was a mezzanine with a sofa bed and two double bedrooms. Outside there was a locked store-room to keep skis and snowboards. The chalet was clean and well-kept, the only downside was having just the one toilet between the eight of us!

St-Jean de Sixt is a small village, it has a supermarket, bakery (that offers morning deliveries but more on that later!). A couple of restaurants, a pizza take-away  and a couple of ski rental places. Don’t expect any lively après here. But the location, just an hour from Geneva and between two good-sized ski areas make it a great long-weekend destination.

On the first morning it was snowing lightly, so after waiting for our fresh bread delivery and setting up the snowboards we didn’t get on the ski bus until 9:30am. We decided to spend the day exploring the Le Grand Bornand ski area as one of our group had skied there before. Also being a little bit lower then La Clusaz we thought the visibility might be better.

The La Joyere gondola takes you up and we did a couple of runs down the Les Envers piste to warm up. We then headed across to the beginners area and stopped to try some very tasty banana rum! From there, we took the Le Lachat chair and came down the long Piste 2000. We explored this area – lots of blues and reds – but the weather was really closing in and it was difficult to work out where we were! So we decided to head for home but not before some of us tried the un-pisted Les Dames run and got stuck within the first 10 meters! Spent 10 minutes extracting ourselves from the deep snow and edged our way down the rest of the piste. It wasn’t pretty but it’s good to challenge yourself occasionally!

A challenging first day, poor visibility, snow and a chilly wind. But still being on the mountain is better than being in the office! We treated ourselves in the evening and head to the best restaurant in town (or so the transfer driver claimed!) Le Cabanon.

It is a cosy little place with only about half a dozen tables and a small, but exciting menu. We all chose to have the three courses for €34 which was really good value as you could choose from any dishes from the menu. The chef was a brilliant guy. He was so upset that half of us had chosen the steak, apparently not enough of a cooking challenge for him! He came out of the kitchen and took the time to explain each dish and what went into cooking it – so passionate. We were persuaded to try some of the more experimental dishes and they were all delicious. Toast flavoured ice-cream was definitely a first! Needless to say we all went home stuffed.

Monday morning and the clouds and snow had been replaced by bright blue skies! Woo hoo! We wasted a bit of time waiting for our bread delivery that never showed up. So it was 9:30am again before we were on the ski bus, this time to spend the day snowboarding in La Clusaz.

La Clusaz is bigger and higher than Le Grand Bornand and it is another traditional French mountain village. There are quite a few options of where to start as the ski area spread over four mountains. We started the day going up the Beauregard gondola and down the lovely blue graded Guy Perillat and red graded Le Neve pistes. Going back up the gondola we went down the long Les Prises piste. Which was tree lined and very pretty (if a little flat for us snowboarders in places!). We were aiming for the L’etale chairlift. But the signposting was not great and we ended up having to walk up the piste a little!

We stopped for lunch in the sun at the top of L’etale, and enjoyed a well-earned beer and very yummy chips. They do great chips in the area, proper chunky ones, a kind of roast potato/chip cross – heaven!

After lunch we did the Les Joux piste down before heading to the top of the Massif de L’ Etale and skiing all the way down and got on the tramway across to the Masif de Aigulle side. Legs were beginning to tire so we wound our way home via the red L’Aiguille piste and the blue Le Dahu and La Merle pistes. A nice long run to finish the day and the thighs were burning at the bottom! We felt we had earned a bit of après fun so found a small bar and sunk a couple. Big beers were only €6, great value for France! Before catching the last bus back to St-Jean de Sixt at 6pm.

The third and last day of skiing and again we were blessed with blue skies. Determined to make the most of the day we didn’t hang about waiting for the bread delivery (good job as it didn’t show up!). And jumped on the 8:40am bus to La Clusaz so we were first in line for when the lifts opened at 9am. We spent the first glorious hour of the day making fresh tracks on the empty and freshly groomed Guy Perillat and La Neve pistes. Only stopping when our tummies were shouting at us for breakfast.

We were keen to head over and explore the Masif de Balme. After a coffee and a crêpe we caught the Cret du Merle chair and made our way down the long La Notte piste. This was another piste that was a little flat in places but it was a beautiful run through the trees. I didn’t mind the walking! We headed up the La Balme gondola and came down the similarly named blue piste before heading right to the top of the Col de Balme. And what a view from the top, on such a clear day Mount Blanc was easy to spot!

The red pistes coming down from the Col de Balme are definitely a step up in technicality. But still very enjoyable and the snow conditions were excellent. All was going pretty well until I tweaked my dodgy right knee which destroyed my confidence. So I did a lot of edging back down to the bottom and spent an hour or so nursing ‘recovery’ beers sitting in deck chairs in the glorious sunshine. It was heading towards late afternoon so we reluctantly motivated ourselves to make a move towards home. Going up the Fernuly gondola and then re-tracing our steps from the day before.

We tried to do some après in St-Jean de Sixt only to discover the only bar in the village is closed on a Tuesday! So we ended up in the bakery! Which also served glasses of wine (only in France!) all a bit random but fun!

We all really enjoyed snowboarding in La Clusaz. A beautiful traditional village, a great mixture of pistes, no queues and brilliant snow conditions. I would like to go back to Le Grand Bornand in better weather! St-Jean de Sixt was a very convenient place to stay. The ski buses were great, the supermarket was well stocked and there are a couple of really nice restaurants. Just don’t expect anything too wild in the evenings!

Now to get planning next years adventure…any suggestions?