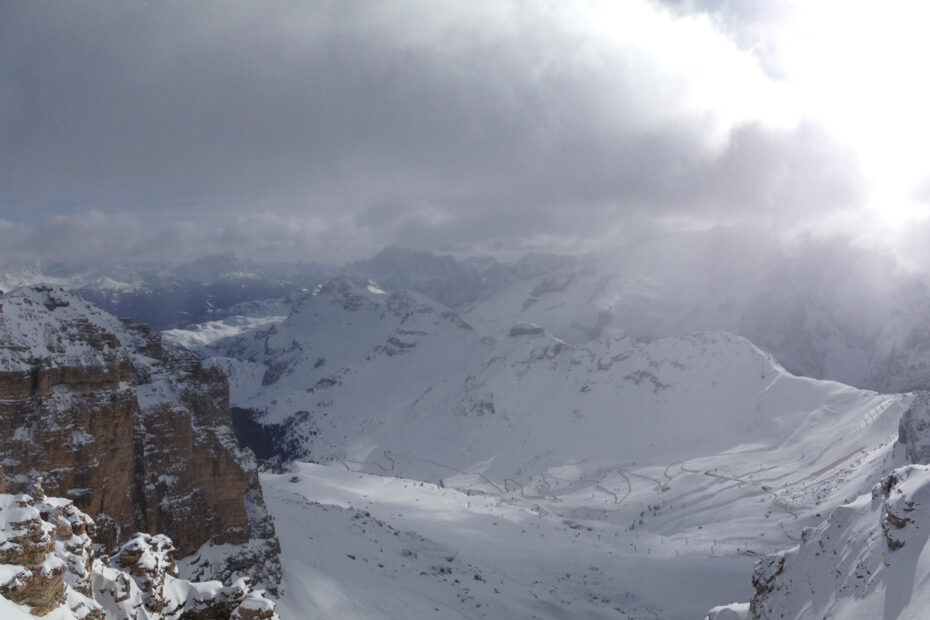 After many years of going to the Val di Fassa we decided to try out a different valley (brave of us!). So we picked the Alta Badia region and stayed in a village called La Villa.

La Villa is a small village but is well connected to the Dolomiti Superski network. There is a really good mixture of of slopes and includes the World Cup ‘The Gran Risa’ slope which is great black that runs back into La Villa – we were lucky enough to get some fresh snow that transformed this slope into a brilliant powder run! Alternatively there is a long blue (a little too flat for snowboarders in places) and a fun red that can get a bit challenging later in the day.

We enjoyed messing around on the long, gentle blues that drop down into San Cassiano – great for some easy off-piste next to the slopes.

We also spent an afternoon on the sledge run that drops down into San Cassiano which is over 3.5k long!! Be warned – don’t fall off the track, you will get stuck if the snow is deep!

A trip to the Dolomites would also not be complete without doing the Sella Ronda – the famous day-long excursion around the mountain. This was the second time I have done the Sella Ronda – and you will need to allow for a bit of extra time if you start from La Villa, it was a long day but we didn’t have to rush. We popped up to the top of the Passo Pordoi on our way round which is well worth it for the views if you have the time.

As for après ski there is not too much, but the mountain hut at the top of the gondola has a good atmosphere when the sun is shining. Also the bar at the bottom of the gondola is fun as the lifts shut and we found a place next to our apartment that sold glasses of wine for €1 …and it was drinkable! We were staying in a self-catered apartment so didn’t eat out much, there are some good restaurants and of course being Italy everywhere does amazing and cheap pizza!

The snowboarding in the Alta Badia region is amazing – beautiful scenery, superb pistes and great food – what more can you want from a winter holiday?

Got a review of your snowboarding holiday? Tweet @ownthetrail