Snowboarding with a baby! 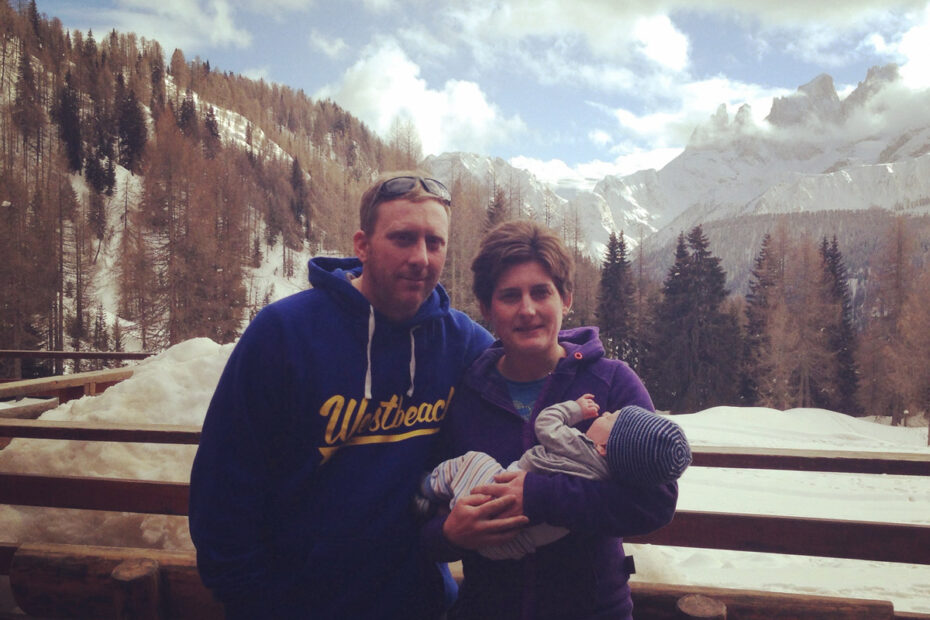 After finding out that I was expecting, my thoughts quickly turned to how I was going to fit the baby in with my love of snowboarding!

My little boy was boy was born in December 2013, and eight weeks later we hit the slopes…how hard can snowboarding with a baby be?! I have to admit to be a little naive about it all, but that turned out to be a good thing.

I took a gamble that I would be physically able to snowboard and booked the flights back in the September whilst pregnant. Once the little man arrived we quickly sent off for his passport. Jessops offer a baby photography service as it is very difficult to get a newborn to sit up in a photo booth!

We chose to go back to an area that we know very well – Pozza di Fassa, and we went with a group of family and close friends who were willing to help babysit and happy to go on holiday with a newborn.

Four weeks after he was born I thought I had bitten off more then I could chew! But by the time the holiday came around and we had all settled into our new lives I was ready to take on the challenge. We flew from Gatwick with BA to Venice and then hired a car for the drive up the mountains – we took our own baby carseat and we just chose to take a sling rather then the bother of taking a pram. Other ‘extra’ items included formula milk and nappies!

The journey went very smoothly, being so young he mostly slept and he was just really interested in what was going on at the airport. We arrived in Pozza di Fassa at about 11pm and went straight to bed. The mountain air seemed to knock the baby out and he slept for 7 straight hours for the first time.

The morning was bright and sunny so we decided to bring the baby up the mountain with us. He chilled out in a mountain restaurant with my sister whilst the rest of us found our feet. I was relieved to find I still had some stomach muscles left after 9 months of pregnancy and was pleasantly surprised how quickly I got back into the swing of things. We were skiing in Vigo di Fassa which is only a small mountain so we could pop by and make sure my sister and the baby were ok.

The other two days of the holiday we spent skiing further a-field so my sister stayed with the baby in the flat – he really does have the best Aunties!

On our last evening we went out for a meal, the little man slept on our laps and it was the perfect way to finish up the holiday – though I did manage to find the energy for a few last turns on the morning of our departure.

The only disaster was the drive back to the airport when the little man decided to scream his head off for 3 hours – well no-one likes to leave the mountains!

It was certainly a ‘different’ snow holiday compared to previous years but I still loved it. We couldn’t have done it without the help of our family and friends, but with a bit of extra planning bringing a baby along was no problem at all. I could have slept for the whole week afterwards…but oh yes I had a baby!

Overall would I do it again…YES! Roll on next year.

2 thoughts on “Snowboarding with a baby!”