Snowboarding with a baby…Part II 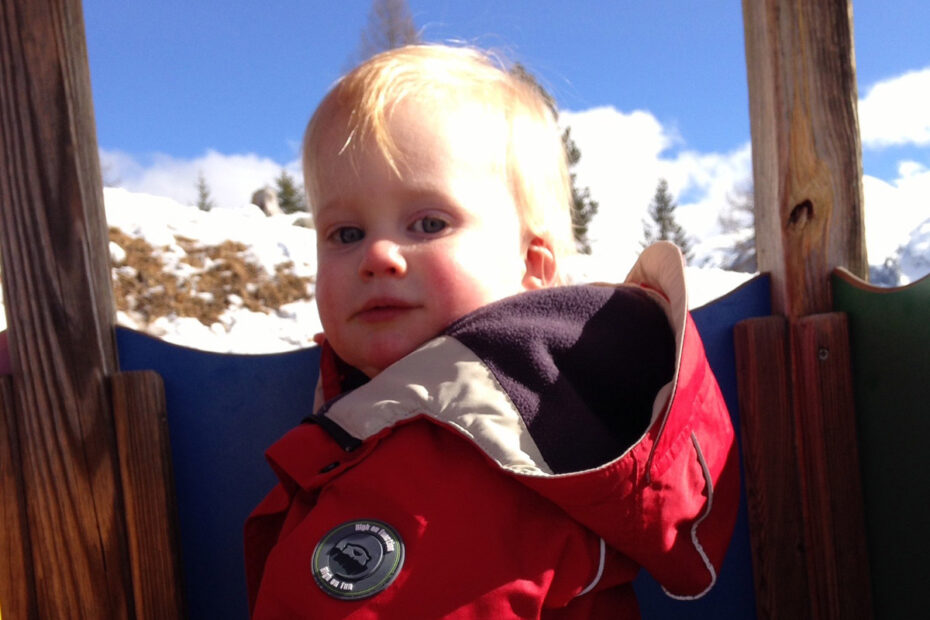 After the success of last years snow holiday with a baby (you can read all about here), when my son was just 8 weeks old. We decided to take a gamble and take him with us again this year! So this is snowboarding with a baby – part 2!

In some ways this years trip took more organisation and was a little more daunting. Last year – he didn’t do much more then sleep and drink milk with the occasional smile. Whereas this year he can crawl and say ‘No’!!

The week before the trip I thought we were in for a nightmare as the teething-gods were not being kind to us. A whole week of miserable, clingy baby who didn’t want to eat anything. But as the day of the holiday arrived he woke up in his default happy mode – phew – holiday saved!!

Thirteen of us (11 adults, a 1 year old and a 3 year old) flew from Gatwick to Venice. Which all went smoothly until we picked up the hire cars. They had to enter all our details manually which took well over an hour! Never use Target Rental Cars at Venice – they are cheap but there does seem to be a good reason for this! We still had a 2.5hr journey up the mountain to look forward too! After eventually getting under way we stopped half-way through the journey for a yummy pizza and then again to put on snow chains (thankfully we did hire these too!). Finally arrived in our resort at about 11pm. The kids were great and just slept for the journey. They didn’t even take too long to settle once we had arrived.

We were staying once again in the village Pozza di Fassa in self-catering accommodation. We stayed in the Casa Rossetti apartments, which have been recently renovated and were very nice. They provided a cot but not a highchair. Italians don’t really seem to use them so I took along a compact travel highchair. A couple of things needed finishing off such as a slightly dodgy banister and you couldn’t use more then two hobs and the oven with all the electrics going off! But on the whole the apartment was to a very good standard. The set-up really worked well for us with a large kitchen diner, 2 bathrooms and 4 spacious bedrooms. 2 of our party stayed in a near-by hotel.

After our later then expected arrival we didn’t exactly bounce out of bed in the morning – with the exception of the children! My son was in a travel cot in our room so of course as soon as he woke up, he saw us, and was saying ‘daddy.’ Very cute but not really appreciated at 6am! It was a pretty slow start to the day and by the time we had all set up our gear and hired stuff it was 11:30am before we hit the slopes.

The first day we skied the slopes at Vigo di Fassa. This is a small area but great for warming up the legs. My sister looked after the little man and met us at the end of the day for a drink. The second day we skied at Alpe de Luisa, it was an amazingly sunny and warm day so the kids came with us. The area is really well set up with great facilities for the children. An outdoor snow an outdoor playground and an indoor soft-play area. My little boy enjoyed some bits but a whole day outside (even with a nap in the buggy) was just too much for him. By the end of the day we had a very grouchy baby. Also my choice of outfit wasn’t the best for him. Went for dungarees with a jacket plus separate booties and gloves. Of course the booties and gloves didn’t stay on, which everyone found frustrating! The quality was very good (from Spotty Otter) but in hindsight should have gone for a all-in-one snow suit. Will know for next time!

The second day it was snowing heavily (big smile) so we just went to the local areas in Pozza di Fassa which was fun but the visibility was rubbish! Still we all managed to survive a couple of black pistes with a smile on our faces. Because we stayed locally it meant we could all meet up at the end of the day for some après in the village!

The fourth day we skied at San Pallegrino, and did my nemesis slope! A blue (yes a blue, what’s so difficult about that right!) that when I first did it on my third ever day of snowboarding it took me and a friend 4 hours to get round! Haven’t been back since! Well it didn’t quite take that long this time and it is very scenic but also very flat and sometimes uphill! Tricky or even impossible for a snowboarder and at over 11km long it still took an hour or so! In the afternoon the group split and some of us went for a walk with the babies. It took us through a beautiful winter wonderland to a lovely mountain hut. It took about an hour with a few small hills. We thought the kids would enjoy being pulled along in the sledge but we ended up walking/carrying them for quite a lot of the time! It was worth it though for the lovely meal at the end. And luckily there was a motor sledge available for the trip home!

The fifth day we skied at Latemer which is a much bigger area so we were really able to get some piste miles under out belts. Again the visibility wasn’t great, but there are some lovely pistes at Latemer. I even managed a few of the features in the park without killing ourselves!

The final day some of us treated ourselves, hired a guide for the day and headed off-piste. Read how that went here!

It was another brilliant week on the snow, and considering the size of the group it all went really smoothly. It was definitely more challenging now that he is older and needs more entertaining. His Aunties did an amazing job of looking after him so Mummy could have some fun! Can’t wait to get the little man on the snow – standing side-ways of course!