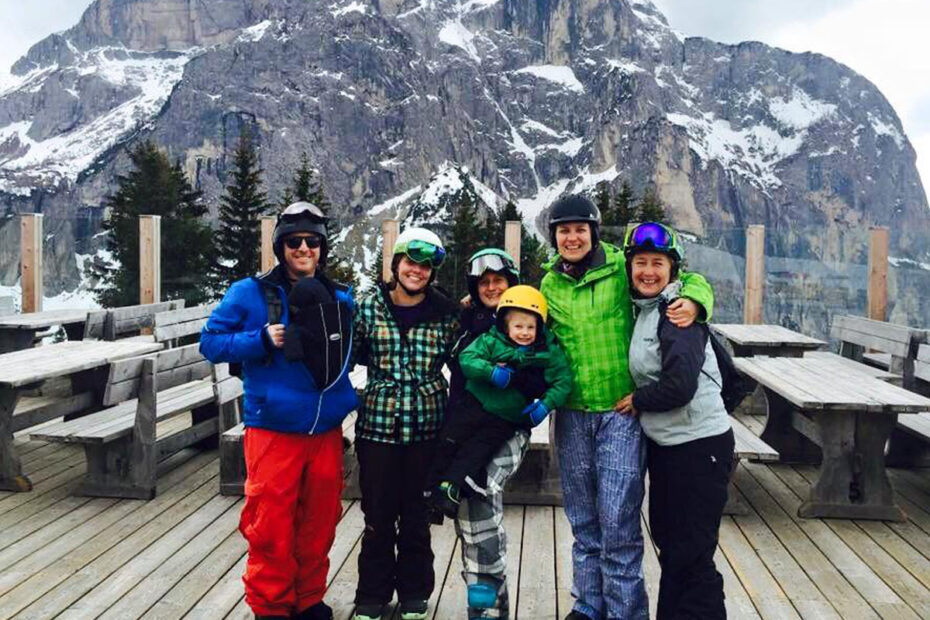 I thought I would have to forego my yearly visit to the mountains due to the arrival of our second child in February. But we managed to sneak in a last minute trip at the very end of the season. Choosing the beautiful village of Civetta in the Italian Dolomites. Hastily arranged flights from Bristol and accommodation sorted with a friend at the lovely Residence Panorama in Zoldo Alto we were sorted. Except for the small task of packing for a three year old and a 7 week old baby – how much stuff!

It has not been a classic season across the Alps and the Dolomites have fared worse then most. So our expectations were low so when we arrived in Zoldo Alto. We were’t surprised to find spring had already sprung and snow was very sparse! But we were only there for a long weekend and there was enough open to guarantee a much needed snow fix. With the added bonus of long lunches on the terraces in glorious sunshine.

From Zoldo Alto you have direct access via a bubble to the Civetta ski area, which is part of the Dolomiti Superski. It is a pretty low mountain, hence the early April closing date, but as with across the Dolomites, the snow making capabilities are excellent. Despite the disappointing season (the worst many locals could remember) there was still well over half of the lifts and slopes open.

The first day we spent exploring the Civetta side of the mountain. We all went up in the bubble and set up camp on the terrace of the bar at the top. Taking it in turns to do a few pistes then coming back to take over the childcare duties. We were all really surprised by the quality of the snow, it was soft, but not slushy and the pistes were still in really good condition with just a few days of the season remaining. My favourite pistes, the long black (no.38) and red (no.39), back down to the bottom of the bubble were still open and lots of fun.

I was really excited this year as Ethan is finally old enough to have a go at skiing. He was really excited to get fitted out with his super cute boots and skis and pretty enthusiastic to give it a go. Being so late it the season our only option was to book him a private lesson with Funny Ski. He had a english speaking instructor called Camila. She was lovely, really patient and he didn’t mind going off by himself with her and have a go.

With a bit of help, and holding onto Camila he managed a sort of snow plough and he did the nursery slope three times before he was knackered. Not helped by the fact he had to walk back up the piste as there was no travelator! We had a few tears at the end but I was really pleased that he gave it a go. Hopefully we haven’t put him off!!

We boarded half the day and stopped around 3pm and found a cool little bar towards the end of the long blue (no.40). Where we lazed around in the sun enjoying a late lunch, a few beers and messed around doing some sledging which the little man loved (more successful then the skiing!).

The second day we headed over to Alleghe, about a 45 minute drive around the mountain. There was even less snow in Alleghe. None of the village runs were open so it was a trip on two bubbles to reach the snow. We set up camp in another bar (inside this time as it was cloudy and pretty chilly) and again took it in turns to look after the kids. I found the pistes over in Alleghe a bit short. Though the red (no.29) was a nice run down to Selva di Cadore. The light was also a little flat which made it a bit more challenging. The highlight of the day was seeing two guys skiing as gingerbread men!

On the last day, and the last day of the season, my friend really kindly took the kids off for the day. So we were free to head up the mountain. We spent the morning on the Civetta side and then headed over to Alleghe via the linking pistes. Which were literally just strips of snow, more like paths then pistes! In Alleghe they had a close of season party. Including people sliding down the piste onboard elaborate sledges into a swimming pool – hilarious! Some of them had really gone to town! The sledges included a piste basher and a Santa’s grotto complete with working chimney!

We finished the day with a few drinks in the sun at the top of the bubble back on the Civetta side before boarding down the black piste. We were pretty much the last people off the mountain for the season – perfect.

The best thing about going so late in the season was we literally had the place to ourselves. It was rare to see anyone else on the piste! Ok, the downside was absolutely no off-piste, but for a couple of days it was perfect. The Civetta area is a really nice size for a long weekend. There are some lovely pistes and being just over an hour from Venice it’s super convenient. There is not much going on in Zoldo Alto. But there is a supermarket, a couple of bars and a dodgy night club! The centre of the village is really quaint, cobble streets and the mountain views are breath-taking.

I wasn’t sure going with two young children was going to be worth the effort. Thanks to the group we went with (my sister and close friends who were amazing helping out with the kids) we all had a brilliant time. It was a much needed break.