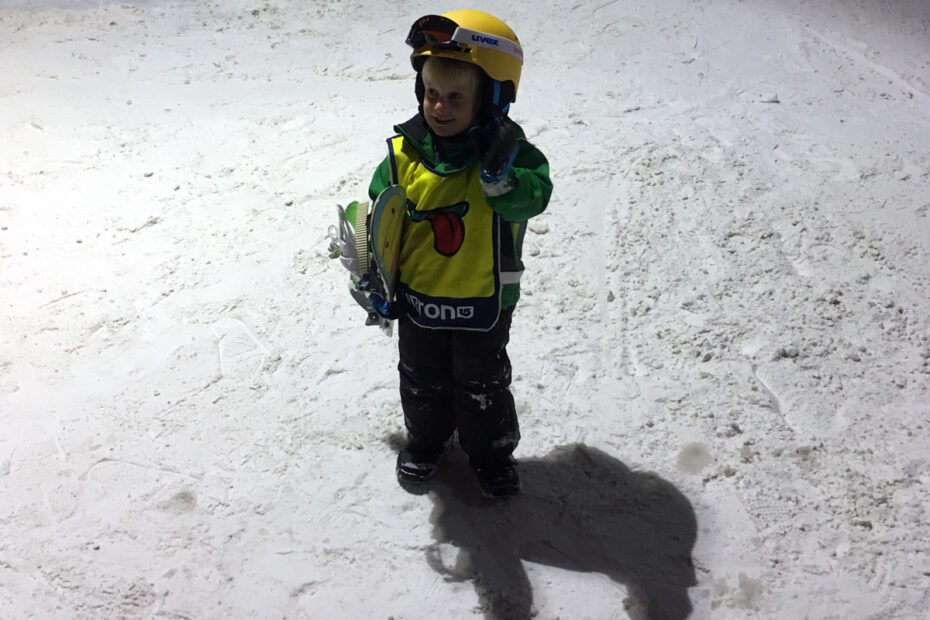 The annual Big Bang Show by TSA was held over the weekend of the 14 & 15th of October at the Tamworth SnowDome. It is a fab opportunity to demo the new seasons boards as well as doing some coaching sessions for FREE! We decided to make the trek up from South West for the day as there was stuff going on for the whole family.

I signed Ethan up for the Burton Riglet experience, the hubby was going to do a freestyle session with Definition. I was on the list for a women’s session with Mint Snowboarding and one of my hero’s Jenny Jones!

First up was Ethan and his Burton Riglet session. He was so excited to be having his first proper go on a snowboard – just like Mummy and Daddy! The Burton Riglet set up is fantastic. The gear is all designed for mini people, Ethan loved putting on the boots and being strapped onto the board. And oh my God, the boards are so cute! The Riglet boards have a reel attached to the front of them to allow the mini rider to be pulled along. They had set up a little circuit of ramps, a see-saw and a mini-slope. Each rider got taken around the course twice by a member of the Burton team. They were all so enthusiastic and this transferred to the kids. Ethan absolutely loved it, despite a few tumbles he was dead keen to jump back up and continue. The session didn’t last long, only about 15 minutes but it definitely inspired Ethan. The cherry on the top of the experience was each rider was rewarded with a goodie pack. Including stickers and a gold medal, Preschooler heaven!

Next up was Dan and his freestyle coaching session with the team from Definition. Using a rail and a small kicker the team gave him some really good tips on how to relax when riding features. For example keeping your toes un-clenched will help your feet relax and in turn your whole body. He really enjoyed the session and gave him the confidence to try park features. Not normally somewhere we spend a lot of time when we are on holiday.

After waiting patiently all day it was finally my turn! My session was with Tammy from Mint Snowboarding and Jenny Jones (Bronze medalist from the 2014 Sochi Winter Olympics). Who I was a little bit excited about meeting! Our session was about core technique. Using the whole of the piste and properly finishing a turn rather then skidding through them. It was a bit tricky to put into practise as the slope was very busy. But I picked up some really good advice. We finished the session with some ollies and tail presses. Stuff I would like to incorporate into my flatland riding so it was great to get some lessons from the pro’s! It was a fab session and it was really good fun to ride with a bunch of such enthusiastic ladies!

It was a fun day out and everyone enjoyed their slope time, roll on February!