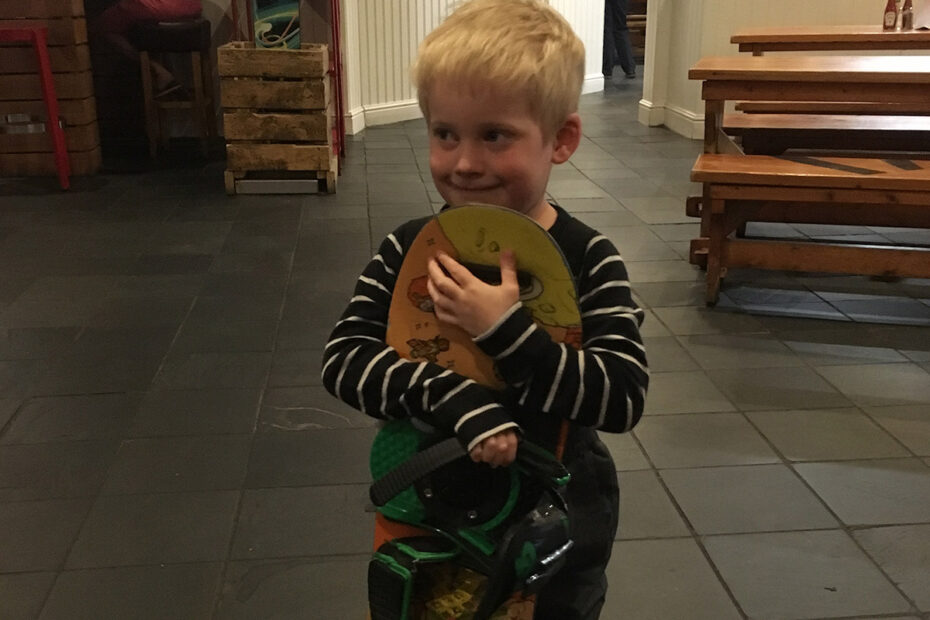 After the debacle that was skiing lessons in Châtel. I had promised my little boy he could try snowboarding, to be like Mummy and Daddy! So, as we were up in the Peak District for a wedding I booked him onto a junior snowboarding intro lesson at Tamworth Snowdome as a treat on the way home. The Snowdome is the only indoor centre in the UK to offer snowboarding group lessons from four years old. The lessons take place in their snowplay area, so away from the main slope.

Each lesson lasts 45 minutes and the Intro session is £24 which includes the hire of all the equipment. All the hire gear is quality Burton stuff. They have boots from infant size 9 and Ethan had a 90cm board. The boots have simple velcro straps and the bindings just have one large strap that secures the boot onto the board. All nice and straightforward.

At 10am we met the instructor and it was pretty much straight onto the snow. Parents were welcome to come in and watch. There were 6 kids in total in the lesson, aged between 4 and seven years old. The instructor gave a quick chat about the gear and how to use the bindings and then it was onto the mini slope. It quickly became apparent that the kids all struggled with strapping into the board. As there was only one instructor this was going to take up most of the session! So me and another parent offered to help with the bindings which sped up the process a lot!

The instruction was very basic. The instructor took each child in turn and held their hands on their heel edge before helping them turn and point the board down the hill, guiding them to the bottom. Towards the end of the session, when all the kids were more confident, the instructor began to let go of them once she had directed them down the slope. I was really impressed with the balance of all of the kids. They were all sliding down the slope by themselves by the end of the session – stopping can come later!

I liked that the instructor kept it nice a simple. With a minimal number of teaching points the kids could just concentrate on finding their feet and getting comfortable on the board and snow. Ethan loved it and given half a chance he would have been down the slope by himself!

So in summary, it was definitely worth while. All the kids really enjoyed it and there were big smiles all around. Ethan did not want to give his board back! We will try to get up to Tamworth again soon so he can do the next level. They need to build a real snow centre in the South-West!