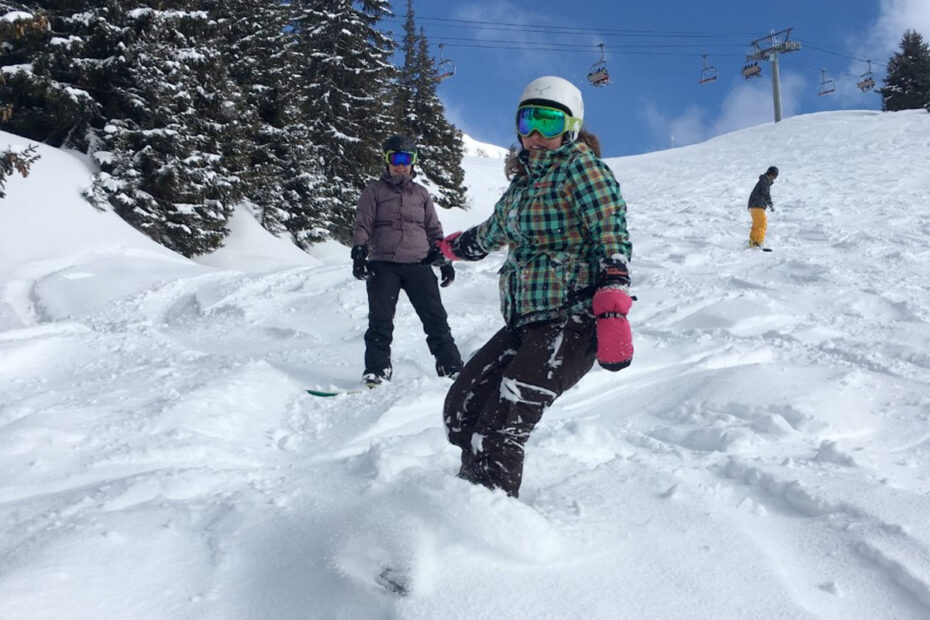 This years annual family ski trip was to Châtel. Part of the massive Portes Du Soleil ski area, which we have visited before, staying in Les Gets. But this was our first visit to Châtel. Just a stones throw from the Swiss border. After the heaviest snow falls in Bath that I can ever remember we were lucky to make it to France at all! We had to dig the car out of our street and our Thomas Cook flight was the only one to leave from Bristol Airport on Saturday morning. It was a well deserved glass of vino when we arrived – unfortunately the fun had only just begun!

We stayed at Chalet Chocolat, which is situated in a part of Châtel called “Très-les-Pierres.” It is convenient location as it is between the two main lifts of Linga and Pré-la-Joux and on a bus route. The buses were great, really useful when you have a large group with different plans throughout the day. But we did hire cars too, just because with small kids we find it really useful to have our own transport for trips to the supermarket etc…

The main village of Châtel was only about a 10 minute drive from the chalet, so pretty easy to pop to after skiing or in the evening.

Chalet Chocolat is a comfortable, purpose-built chalet. The lounge/dinning room and kitchen are all open plan which makes it really sociable and great for families and groups. Our group of nine (seven adults and two kids) filled the chalet.

There is a lovely log fire and the balcony was great to chill on when the sun came out. The kitchen was well equipped and there was a store cupboard full of useful bits. There are four bedrooms, two with en suite bathrooms. The bedrooms were a little on the small side, especially the room with bunk beds. The only other downside to the chalet was the lack of any soundproofing. Not the best when you have a one year old who wakes up at the crack of dawn!

The owners were really helpful and always very prompt with the answers to any questions. They offer a shopping service, which was great. We sent across a list the week before and it was all done for us on arrival – what a treat!

The chalet was very comfortable for the week and we were generally very happy with the set up.

The Skiing in Châtel

Châtel is part of the massive Portes Du Soliel ski area and there are options to ski in both directions. The snow has been incredible this season. So all the pistes were in really good condition but as it was still a French school holiday week the area was busy. Some of the main runs were mogul fields by the end of the day.

The pistes in the Linga – Pré-la-Joux area were really enjoyable. Some really good long runs and some great, easily accessible off-piste. We were super lucky and had some fresh powder days – always the BEST!

The Super – Châtel area was not so good, the pistes were quite short. Too many drag lifts to avoid! Towards Avoriaz it did get very busy but we enjoyed messing around in the Lil’stash, loads of fun and nothing too scary!

I had booked my eldest son, who was four at Christmas, with five mornings of ski school with the ESF in Châtel. He is a pretty independent kid who is usually more than happy to do things without Mummy, but ski school did not go well! He was really excited about going and had been talking about it for weeks! I dropped him off the first morning with no problems at all. Unfortunately there were tears by the time I picked him up at mid-day. The next morning we got to the ski school and he threw his toys out of the pram big style!

The third morning, we persuaded him to go with the caveat that an adult would stay and watch. So my friend stayed with him and she was not impressed by what she saw. Yes, they taught them to ski but there was no ‘fun.’ They were made to eat snack in silence in the basement of the ski school. The instructors seemed to have little enthusiasm for helping the kids and many were left sat on the floor crying. Ethan survived the morning and could do all the basic drills so basically by the end of the third day he’d decided that he was a pro skier and that was the end of his ski school education! And after what my friend witnessed I didn’t have the heart to even try to make him go again.

It was very disappointing and certainly did not live up to my expectations. However it doesn’t seem to have put him off and he was showing off his snow-plough skills on the nursery slopes at the end of the week! I think I would definitely look for a British ski school next time.

So after all the excitement of actually making it to France, my husband woke up on the Sunday morning with acute stomach pain. He is not usually one to make a fuss and with a day of powder riding on the table it was with much reluctance that we decided to do the sensible thing and go to the hospital. The nearest hospital was a 30 minute drive back down the mountain into Switzerland. Within two hours he was in surgery having his appendix out! Thankfully he has now made a full recovery but it was pretty rubbish. No snowboarding for him and he couldn’t even join in with the sledging.

A summary of our family ski trip to Châtel

I’m not sure I would go back on a family ski trip to Châtel, the village is very spread out and does not have quite the same family friendly vibe of Les Gets and the amenities are not generally as convenient.

However Swiss hospitals are very efficient and I was also impressed with our insurance company Insure & Go who were very helpful and made sure all the costs were covered!

On to planning next years trip…any suggestions?