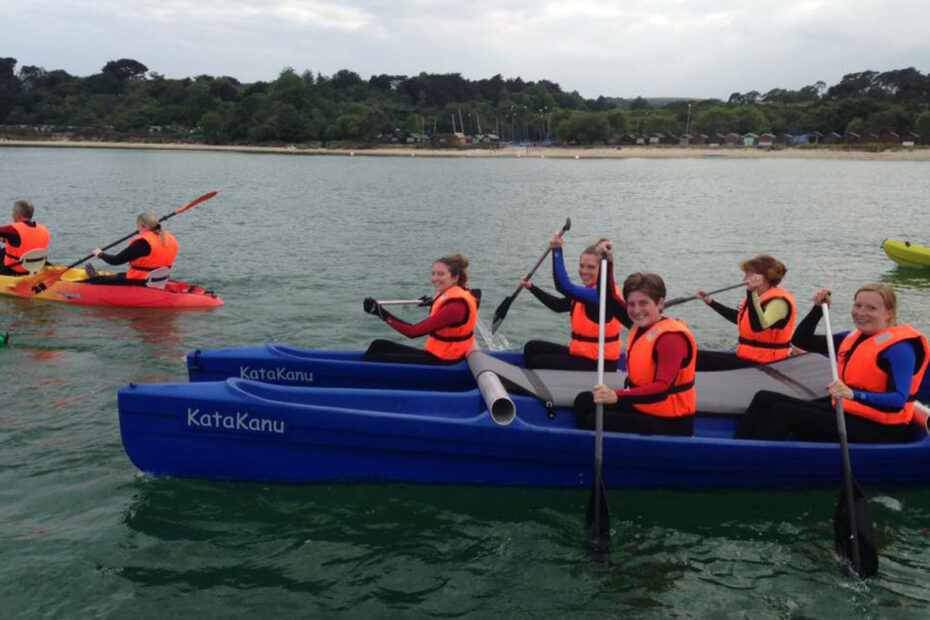 Kayaking is not something I do very often, but I’ve always enjoyed it. We were on our annual girlie camping weekend so the five of us decided to give it a go. We booked a guided kayaking trip in Studland Bay. What could possible go wrong!

We got kitted up in wetsuits, which is always hilarious – why are they so hard to put on!! And got given our kayak – yes all five of us where in the same boat a Katakanu! A cross between a kayak and catamaran! The instructor got us into the kayak, three on one side and two on the other. It seats six so we had to try and balance it out best we could. He gave us the top tip that we needed to use teamwork! The other kayakers we were with were all having a good giggle at us. We wondered what we had let ourselves in for!

Studland Bay is perfect for the beginner kayaker. The bay is protected from the prevailing winds and waves making for calm seas. As we followed the guides and headed towards Old Harry Rocks, we quickly got into the swing of things, well most of us did! There was some clashing of paddles and we might have taken out a few other boats!

It took about 45mins of paddling to reach Old Harry Rocks. Where we had the opportunity to pull the boats up onto the beach, ditch the life vests and go for a swim around the rocks. It was brilliant to see the rocks up close after many years of looking at them from the beach! The water was still pretty chilly, even with wetsuits, so after 15mins of swimming we jumped back into the boats and went for a paddle for around the rocks. Which is when things got a little interesting!

We managed to time going through a narrow section of rocks with a HUGE ferry going past. This created massive waves that appeared from nowhere! There was no turning back! So we paddled as hard as could (for our lives!) and somehow made it through without ending up in the rocks. We were quite proud of ourselves! After a bit of bailing out things calmed down again after that. Only one or two more close calls with the rocks! Steering the Katakanu through the narrow bits was really tricky, it took forever to turn!

Coming back we hugged the coastline and with aching arms we made it back to Knoll beach alive and ready for the BBQ!

Kayaking in Studland Bay is perfect for beginners. It was a great experience. We were really lucky with the weather (the rest of the weekend was rubbish!) and thought that £25 for the guides, equipment (including wetsuits) and BBQ party afterwards was excellent value. Really made the weekend – good work National Trust and Studland Watersports! If you are down that way, give it a go!